Understanding Mycotoxins and Predicting Risk in a Changing Climate

According to NASA, the Earth’s average temperature has increased by 1.9 degrees Fahrenheit since modern recordkeeping began in 1880.

Average global temperatures in the last four years have been the hottest years on record. There have also been more high temperatures extremes with many areas experiencing droughts.

Some regions, however, experience more substantial rainfall as a result of climate change. The United States has seen heavier precipitation and more flooding events, as noted by the U.S. Global Change Research Program. 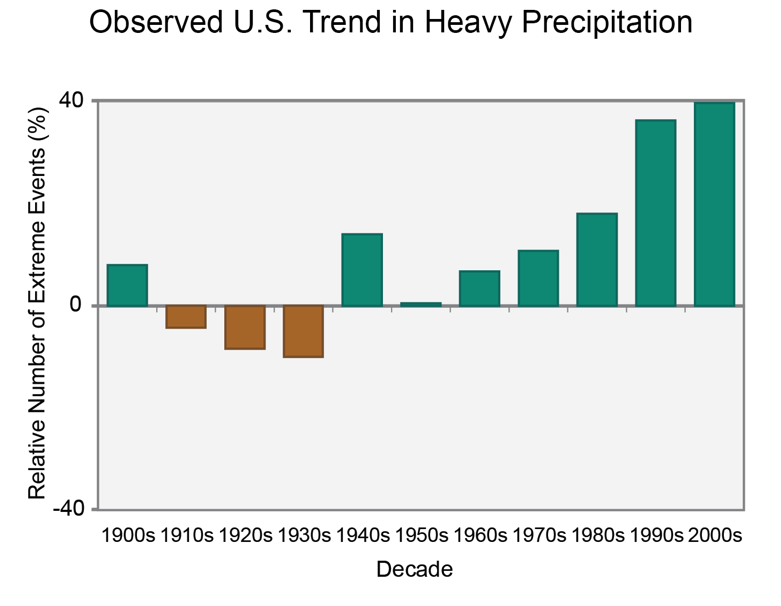 The map below shows the percent increase of heavy precipitation in US regions from 1958 to 2012: 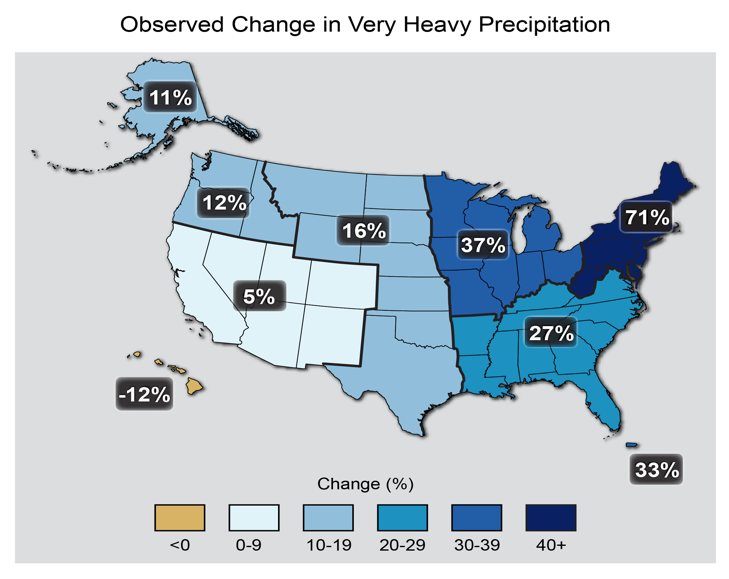 These changing conditions can increase the risk of mycotoxins in food and feed, which has both health and economic implications. It is something in which farmers, grain inspectors, buyers, and merchandisers need to be aware. In this article, we give you an overview of the situation and provide you with some useful tools to help manage this risk.

The word “mycotoxin” is derived from the word “myco” (relating to fungi) and “toxins.” It was coined in the 1960’s when 100,000 turkeys in England died from turkey X disease. Peanut Meal contamination caused the death of these turkeys and autopsies revealed damaged livers and tumors.

The earliest recognized mycotoxin outbreak was known as St. Anthony’s Fire, which was widespread in Europe during the Middle Ages. Paintings and writings depict people suffering from gangrene, lost appendages, and hallucinations brought about by the outbreak.

We now know that different types of mycotoxins target different body systems and organs.  Some mycotoxins can affect multiple body systems. Most mycotoxins suppress the immune system, making it easier for bacterial infections and diseases to occur.  In animal studies, the young are more susceptible to mycotoxins than adults.

Aspergillus, Fusarium, and Penicillium are the primary species of disease-causing fungi. Mycotoxin contamination typically starts during the growing season. Risk of contamination increases during harvest, drying, and storage, especially when environmental conditions are ripe. 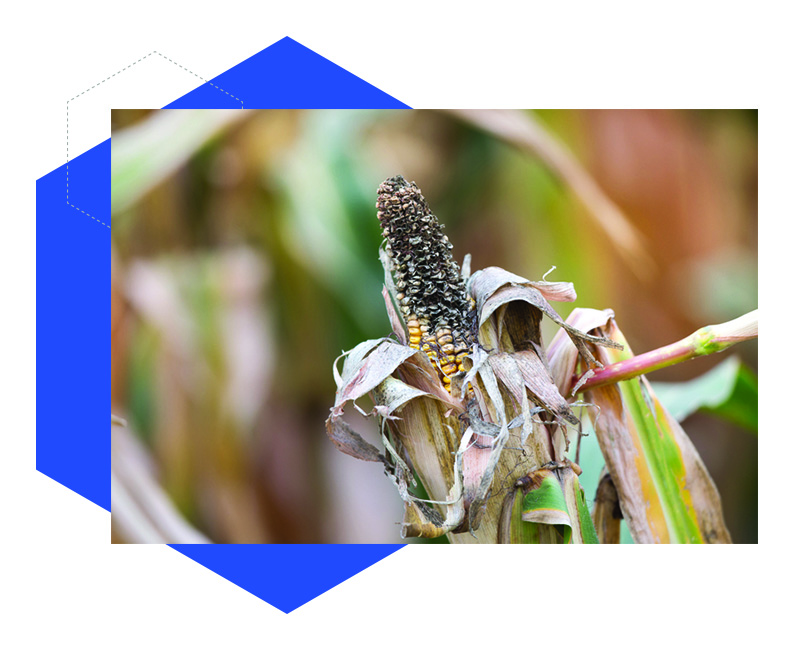 Foods made from contaminated crops are not the only risk factor. Animals that have consumed contaminated feed can also pass on these mycotoxins found in meat, milk products, and eggs.

Unfortunately, mycotoxins are not easily removed or destroyed during food processing. For this reason, many food processors will not accept feed containing mycotoxins into their facilities. Mycotoxins affect 25% of the world’s crops, costing US agriculture $1 billion/year. This problem will likely get worse with a changing climate.

Let’s take a look at some of these mycotoxins in more detail.

Most mycotoxins impact the immune system. Certain body systems and organs are affected more so than others, depending on the mycotoxin ingested. Fungi species don’t all respond to the same environmental conditions or infect the same type of crop. More than one fungal species can produce the same kind of mycotoxin.

Aflatoxins are one of the primary mycotoxins impacting human and animal health. They are produced mainly by Aspergillus flavus, Aspergillus parasiticus, and Aspergillus nomius. Aspergillus thrives in warm, humid, and subtropical regions. High temperatures and drought conditions cause plant stress, which increases fungal colonization. 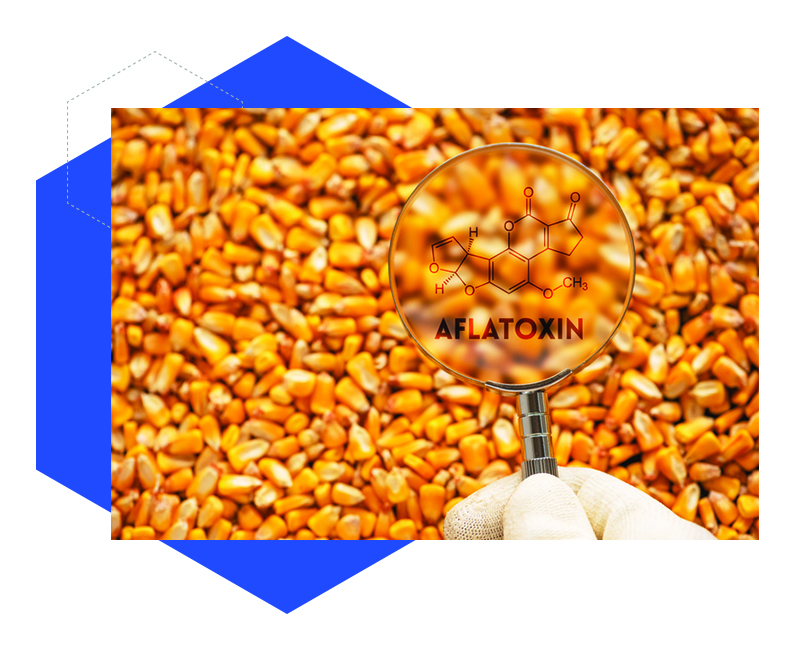 There are over 20 known aflatoxins, but the primary ones are B1, B2, G1, G2, and M1. Aflatoxins are carcinogenic (cancer-causing) and mutagenic (DNA altering). They can cause liver damage, tumors, birth defects, chronic disease, and even sudden death.

Vomitoxin (called deoxynivalenol or DON for short) is another common mycotoxin. Part of the trichothecene family, it is produced by Fusarium graminearum and Fusarium verticillioides.

Fusarium prefers an environment that is wet and cool. Infection can happen on the field between flowering time to maturity, as well as during storage. DON can cause scab or blight disease in grains. Even visibly healthy-looking grain, however, can still contain a high level of DON. Vomitoxin can be found in flour, bread, beer, and baby food, as well as in liver, milk, and eggs.

DON exposure can cause vomiting, taste aversions, and even anorexia. It can make the digestive system more sensitive. Pigs are particularly sensitive to DON and it often causes kidney disease in mice.

Fumonisin, produced by Fusarium verticillioides, can cause significant health problems in horses and pigs. This mycotoxin causes human esophageal cancer, as well as diseases affecting the brain, lungs, liver, and kidneys.

Zearalenone is an estrogenic mycotoxin produced by Fusarium graminearum. It can co-occur with DON.

In humans, zearalenone impacts the reproductive system. It causes early puberty in 7 and 8-year-old children and premature breast development and breast enlargement. Zearalenone may be involved in cervical cancer as it produces an enlarged uterus in mice.

Pigs are particularly sensitive to zearalenone. They may experience vulvovaginitis, abortion, and a wasting away of ovaries and testicles.

Ochratoxin, produced by both Aspergillus and Penicillium, can cause significant disease in animals. Found in pig, poultry, and meats, ochratoxin targets the brain, kidneys, and liver.

T-2 is a toxin produced by Fusarium and is found in European grains more so than in US grains. This mycotoxin can be lethal, as it impacts protein synthesis and cell replication. Due to a delayed harvest from World War II, T-2 was responsible for killing almost 100,000 people in Russia in the 1940’s.

Aflatoxin contamination is more likely to happen in drought conditions. During the 2012 drought, the US Corn Belt endured below-average rainfall and higher than average temperatures.  Not only did farmers see reduced yields, but they also found increased levels of aflatoxin, resulting in food recalls. Similar outbreaks occurred in 2003 and 2005 in Iowa. These outbreaks lead the Department of Agriculture to petition the FDA to allow for lower concentrations of corn blending. 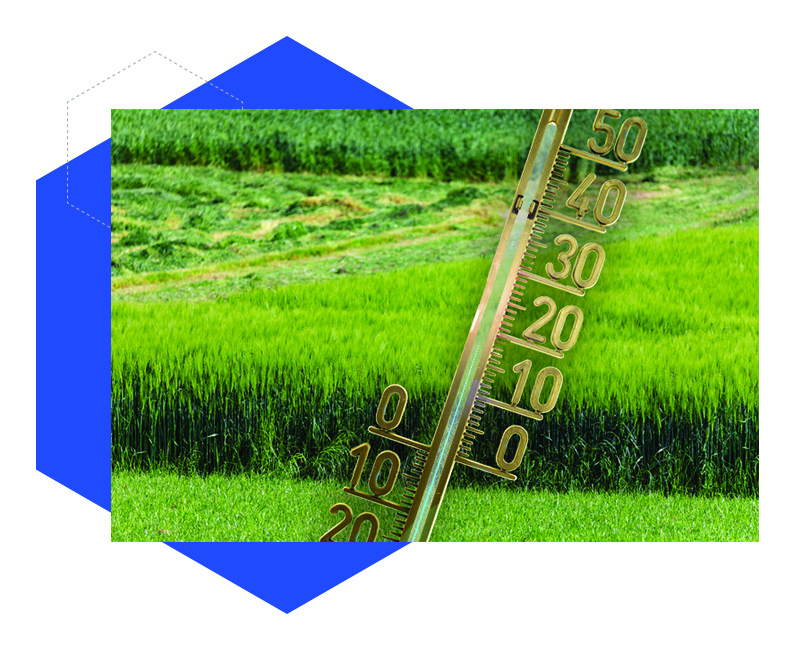 Wet and warm conditions, on the other hand, can cause an increase in DON contamination.  The high relative humidity is ideal for Fusarium growth. These conditions are especially problematic with wheat just before and during flowering and in corn during silking. In 2016, wet conditions in the US Corn Belt caused a vomitoxin outbreak, causing feed companies to purchase corn from South America.

Tools and Resources to Manage Mycotoxin Control in Changing Climates

Agricultural practices, such as rotating crops, fungicides, rodent control, and reducing mechanical damage, can control mycotoxin risk. However, there are still forces out of our control, such as flooding, hot weather, and drought. With the right forecasting tools and information, mycotoxin exposure is minimized.

Below are some excellent tools and resources:

The FDA establishes action levels to help control mycotoxins in the United States and keep contaminated agricultural products from entering the food chain. There are legal limits to mycotoxin levels in our food that take into consideration tolerable daily intakes for both humans and animals.

As the climate continues to change, farmers, grain inspectors, grain buyers, grain merchandisers, and food processors will need to take a more proactive approach in controlling this significant health threat. This problem will impact the safety of our global food supply.