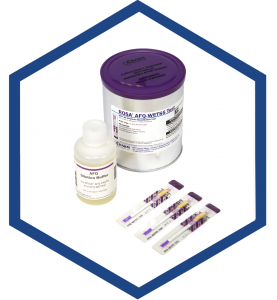 Charm Sciences, Inc. announces that the United States Department of Agriculture’s Federal Grain Inspection Service (USDA-FGIS) has renewed the usage of the ROSA WET-S5 Aflatoxin Quantitative Test. This lateral flow test was first approved in 2014, again in 2017, and is reapproved for the detection of aflatoxin in barley, brown rice, corn, DDG, DDGS, hominy, sorghum, soybeans, and wheat.

“Charm Sciences is pleased to announce the reapproval of the ROSA WET-S5 Aflatoxin Quantitative Test,” stated Mark Tess, Ph.D., Mycotoxin Product Manager at Charm. “The certification marks the third approval of this test kit, which shows that the market favors water-based testing and continued success of lateral flow technology to test for aflatoxin.”

“Charm Sciences is excited to be awarded the aflatoxin contract for another five years to test grains in the FGIS’s testing program,” said Dr. Tess. “The AFQ-WETS5 test is FGIS approved for 9 commodities and the 5-minute incubation time allows for rapid measurement to meet the demands of the program.”

The AFQ-WETS5 test utilizes Charm’s patented Rapid One Step Assay (ROSA) technology to extract aflatoxin from the sample without organic solvents. Like all of Charm’s ROSA mycotoxin tests, the AFQ-WETS5 test can be read and recorded using the all-in-one Charm EZ-M System. The Charm EZ-M System allows incubation and analysis with the same equipment and is robust enough that tests can be run at the point of receiving.

This website uses cookies to improve your experience while you navigate through the website. Out of these, the cookies that are categorized as necessary are stored on your browser as they are essential for the working of basic functionalities of the website. We also use third-party cookies that help us analyze and understand how you use this website. These cookies will be stored in your browser only with your consent. You also have the option to opt-out of these cookies. But opting out of some of these cookies may affect your browsing experience.
Necessary Always Enabled

Any cookies that may not be particularly necessary for the website to function and is used specifically to collect user personal data via analytics, ads, other embedded contents are termed as non-necessary cookies. It is mandatory to procure user consent prior to running these cookies on your website.