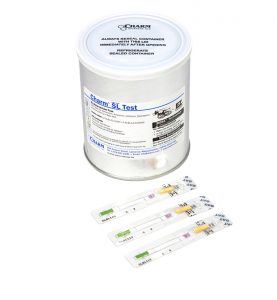 The ROSA SLBL Safe Level Beta-lactam test enables dairies and food manufacturers to detect five beta-lactam drugs in bovine, goat, sheep, and buffalo milk. The SLBL test is US NCIMS approved for screening of raw commingled milk under Appendix N of the US Pasteurized Milk Ordinance.

This 8-minute Rapid One Step Assay (ROSA) is the most popular milk test used by the US dairy industry.The SLBL test was the first Charm ROSA test. ROSA tests use patented technology to target drug sensitivities to safe and regulated levels, which prevents unnecessary rejection of milk caused by overly sensitive screening tests.

The SLBL test detects five of the most widely used beta-lactam drugs in the US. A milk sample is added to the lateral flow test and incubated for eight minutes. Results can be read using the Charm EZ system or with the ROSA Pearl-X Reader. The Charm EZ can be set up to run in a vehicle or to have data transmitted to a LIMS system.

The SLBL test can also be used unofficially for testing individual cow samples and pasteurized whole milk. This provides a uniform testing format throughout each stage of the milk production process.

Lower operating costs and improve transportation efficiency by clearing good milk quickly with the Charm ROSA (Rapid One Step Assay) lateral flow strips which detect aflatoxin M1 and the most common antibiotics used to treat dairy cows. ROSA tests use patented technology to target drug sensitivities to safe and regulated levels, which prevents unnecessary rejection of milk caused by overly sensitive screening tests. The tests are easy to perform and are manufactured to test for US Safe Levels, EU MRL/ CODEX/ Customs Union maximum residue limits and multiple other country-specific requirements. Charm ROSA tests have been granted approval by regulatory authorities around the world.

Test results from ROSA strips may be read and officially recorded using the Charm EZ system, or the ROSA Pearl-X Reader, or may be interpreted visually in an unofficial capacity, making it ideal for farm use.

The SLBL Test is easily read on: